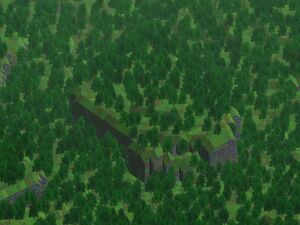 One of the only screenshots available for RubyDung.

RubyDung was a building game created by Notch before Minecraft at an unknown date. Not much else is known about the game other than it is influenced by Dwarf Fortress.

The grass, dirt, and cobblestone block textures that were used in this game were later used in Minecraft, and the textures were randomly colored. It includes a 3D texture mapper.

RubyDung inspired Notch to make Minecraft when he wanted RubyDung to have a first-person view, but when he tried making this, he thought that the textures were too blurry and distorted. Shortly after Notch's days coding for RubyDung, he came across the game Infiniminer, which put down the foundations for Minecraft.

On October 30, 2009, Notch talked about RubyDung on his blog in an entry titled "The Origins of Minecraft".

The name "RubyDung" was a placeholder name for a dungeon game in the "rubylands", a rough draft of a game world by Notch.[1]

Minecraftแม่แบบ:'s source code came from RubyDung, so early Pre-classic versions of Minecraft have the "rd" (RubyDung) prefix. Early Minecraft versions were based on a combination of Infiniminer, Dungeon Keeper and the source code of RubyDung.