Magma blocks are light-emitting naturally-occurring blocks found in the Nether and the Overworld, which cause fire damage when stepped on.

Magma blocks can be mined using any pickaxe. If mined without a pickaxe, it will drop nothing. แม่แบบ:Breaking row 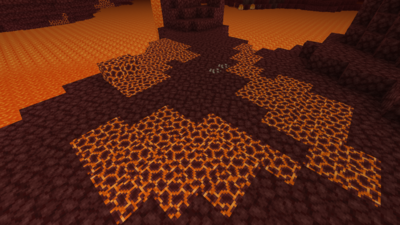 Natural generation of magma blocks in the Nether.

Magma blocks are found naturally in the Nether, around the level of the lava sea, between Y=23 and Y=37. They generate in large veins of similar size to dirt and a similar frequency to blocks like andesite in the Overworld, generating 4 veins per chunk.

In the Overworld, magma blocks generate at the bottom of ocean ravines.

Magma blocks also generate as a part of underwater ruins.

Magma blocks damage living entities standing on top of them even if underwater (with exceptions such as shulkers or guardians), dealing 1 (แม่แบบ:Healthbar) of damage every tick (although damage immunity reduces this to once every half-second). Magma blocks do not destroy items. Damage taken is considered fire damage and is reduced by armor, shields, the Resistance potion effects, and the Protection and Fire Protection enchantments. Armor will take damage, but a shield will not. The player can avoid being damaged at all, either by แม่แบบ:Control, using a potion of fire resistance, or by wearing Frost Walker boots.

Blocks that are the height of a trapdoor or lower (such as snow layers, carpet, repeaters or comparators) will not prevent a magma block from damaging mobs and players above it.

Mobs avoid magma blocks that are in the way. Most mobs don't spawn on magma blocks (exceptions are magma cubes, zombie pigmen, ghasts, and squids).

When a magma block's top is lit on fire, the fire will burn indefinitely.

Placing magma blocks under water will create a whirlpool bubble column, which will pull down items (including boats), players and mobs.

A player can restore breath by entering a magma block's bubble column.