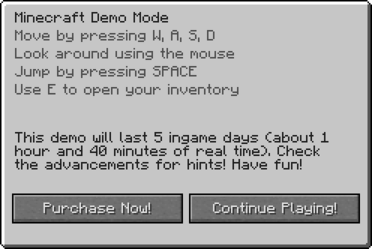 The demo mode is a demo version of Minecraft for users who have not purchased the game yet and would like to try it out first, designed to replace the functionality of the outdated PC Gamer Demo.

The demo version of Java Edition can be played free-of-charge by registering a Mojang account and logging into the Minecraft launcher.

The demo version functionally serves to allow players to try out the game before making the decision to buy Minecraft. It allows players to play on a single world for a 100 minute (5 in-game days) period before the map is locked and required to be reset.

While the demo version does not expire, it comes with certain restrictions, as its sole purpose is to allow new players to try out Minecraft.

The following restrictions apply when playing the game in demo mode:

A demo version of Pocket Edition Alpha 0.2.1 was released, but was never updated and was eventually removed from app stores. The Pocket Edition demo had the following restrictions:

A demo version of Bedrock Edition will be available for Windows 10,iOS (8.1 or above) and Android (5.1 or above) which will be obtained via clicking the upcoming Trial button at the Microsoft Store, Installing From Play Store And Getting From App Store.

In November 2018, a demo version for Android named "Minecraft Trial" is being released in most countries. However, restrictions will still be applied; for example, some blocks and items will be removed, including barriers and command blocks (all types). The user will be able to download it on the Microsoft Store, Google Play Store and App Store for free.

It will have the following restrictions: