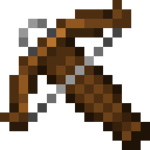 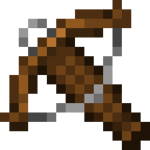 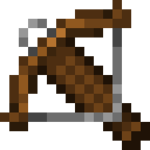 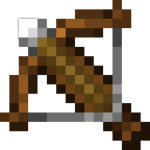 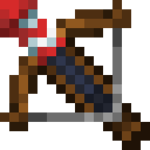 Crossbows are similar to bows, but take longer to load and are slightly more powerful, shooting farther due to slightly higher accuracy. They can be drawn back by using them, forcing you to move at a sneaking speed, and unlike bows, the arrow or firework rocket will only be fired after it is fully loaded. Once it has reached full charge, the player's speed returns to normal and the crossbow can be placed in another inventory slot or into an item frame without the arrow or firework rocket being unloaded or fired. In order to use the crossbow, at least one arrow or firework rocket must be present in your inventory. The player can choose which type of arrow to fire based on its location in the inventory. Arrows in the off-hand, or the selected hotbar slot if the crossbow is in the off-hand, are prioritized first. If there are no arrows in the off-hand or selected hotbar slot, the arrow closest to slot 0 is selected.

Endermen cannot be hit with crossbow arrows no matter what, as an enderman shot with an arrow will teleport, and the arrow will disappear without a trace.

If a shot firework rocket hits a mob, the rocket will explode instantly.

Crossbows can be repaired in an anvil or grindstone by combining two crossbows, but this will sacrifice any ammunition loaded in both crossbows.

Crossbows can receive 3 unique enchantments, and have a base enchantability of 1.

If commands are used to enchant a crossbow with Quick Charge V, the crossbow will charge instantly. A crossbow enchanted with Quick Charge VI is effectively impossible to charge, which renders it useless. This can only be done in Java Edition, as in Bedrock Edition, /enchant limits the level to the maximum normally obtainable.

Multishot (I) makes the crossbow fire a spread of 3 projectiles at once instead of a single projectile. This works for both arrows and firework rockets. Each shot still costs only one projectile, and because of that, it is only possible to recover one of three arrows shot from a Multishot crossbow. Multishot crossbow uses 3 durability points per one shot.

Piercing (I–IV) makes arrows shot from the crossbow pierce entities they hit and continue their flight, which allows each arrow to hit up to แม่แบบ:Code entities. Armor stands and end crystals cannot be pierced.

If commands are used to enchant a crossbow with Piercing V or a higher level of the enchantment, the enchantment will have no effect, and arrows shot from the crossbow will not pass through hit entities.[เฉพาะรุ่น Java]

Crossbows can also be enchanted with Mending and Unbreaking.