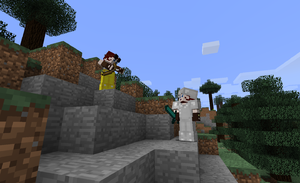 PvP (Player versus Player) on a multiplayer server.

Multiplayer is the server-based version of Minecraft that enables multiple players to interact with each other on a single world, allowing them to work together to mine ores, build structures, and fight mobs (or each other).

Multiplayer works using a server, which allows players to play online or via a local area network with other people. There are various customization options which can be set by operators. These settings depend on the type of server and can create many different multiplayer experiences.

Gameplay in Minecraft is generally the same in both single player and multiplayer, with some notable differences. Multiplayer has more of an emphasis on community and collaboration between players, which is assisted by the multiplayer chat function. Multiplayer allows for the player to build contraptions that are intended for multiple players. In addition, there are many adventure maps and mini games in which multiple players are required.

There is also an important difference: pausing the game works differently (like pausing when you open a LAN world in singleplayer). No game mechanisms stop working if you pause the game. For example, if you have items being smelted in a furnace, pressing ESC does not stop the smelting process. 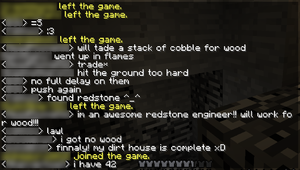 Shows (from up to down) bold, strikethrough, underlined, italicized, and reset (§r) text (also default)

Please note: Several of these commands are configurable (the defaults are shown here)

In multiplayer, players can press T to open the chat and talk to other players. Chat functions include:

Players can also type commands into the chat box. Commands are identified by the server with the use of a forward slash (/) at the beginning of the message.

The chat box can be reduced in size, the opacity may be adjusted or it may be hidden via the chat settings in the options menu.

The user then receives a error message that is only seen by the user who has done the error that can be of all reasons why above.

Pressing CTRL + B toggles the narrator, a text-to-speech engine that automatically reads chat messages, including the username. This keyboard shortcut is intentionally hardcoded as to be unchangeable,[1] but for unknown reasons. The narrator can be toggled between several settings:

The narrator does not read commands or command outputs.